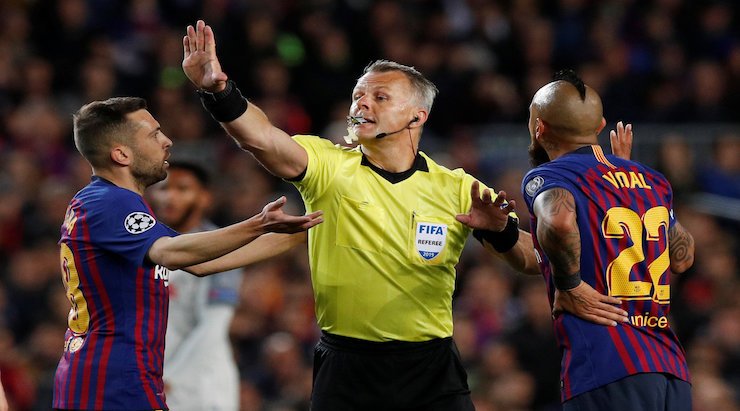 The unknown rules of football:

Do supporters really know all the rules of football? Some situation almost never happens, but all rules must be set correctly and well known by the referee. Some of the technicalities of these rules may have escaped you, a little reminder in 10 points of those details that make football so enchanting. After reading this, you can shout at the referee with a full understanding of the facts.

As long as he hasn’t been touched by another player. So if the shooter hits the bar, the ball comes back to him and the player scores, the goal is denied.

If an external object stops the ball, a goal isn’t awarded

If the ball is moving towards the goal and there is no way any player can stop it but an external object, such as a dog, streakers, some other balls, bottles, intervenes and stops the goal, no matter how close the ball might be to the goal a goal can’t be awarded.

In the event two fouls a the same time, the referee must sanction the most serious one.

If a player grabs the jersey of another player and then tackles him in the throat, the tackle in the throat will be sanctioned. Not so much the tee-shirt grabbing.

You can’t score on a throw-in

You can’t throw the ball directly inside the goal. Another subtlety is that all players must be at least two meters from the throw-in until the ball is in play.

But, you can score directly from the kick-off

The referee is required to prevent any intrusion into the field

Technically, It is therefore normally up to him to tackle any “streaker” who decides to cross the field naked in a match broadcast in prime time. But mainly security staff members are the ones running after the pitch invaders

So if the goalkeeper makes a kamikaze exit, the attacker is out of the game even if there is still a defender in his way. And if the offside is not considered passive, and that it is not in the other half of the field, and it’s not touched, or a corner, or a goal-kick. Tricky offside.

We can make a decisive pass on a penalty kick

And there are two schools of thought: to succeed like Messi and Suarez against Celta Vigo in 2016 or to screw it up just fine like Pires and Henry in 2005 with Arsenal.

Goalkeepers can only hold the ball for 6 seconds

If you kick a free-kick into your own goal the other team gets a corner.

You can never score an own goal directly with any kind of play to restart the game (free kick, corner kick, goal kick, throw-in, penalty kick). But if you send the ball into the net, effectively the ball crossed your goal line and your touch was the last one. Therefore, a corner kick. It makes sense.

Does not apply to goal kicks kicked directly from the small box into the net: for any goal kick or free kick to be performed in your box, the ball is in play only when it comes out of the box. If you kick the goal kick directly into the goal, then it never exited the box and the goal kick has to be repeated.

You could technically concede a corner kick by “own-goaling” your goal kick by sending the ball out of the box and then back in. This can happen due to the wind, or the ball bouncing on a corner flag or the opposite goalposts to come back.

If that happened, it would be the weirdest moment in football history ever.