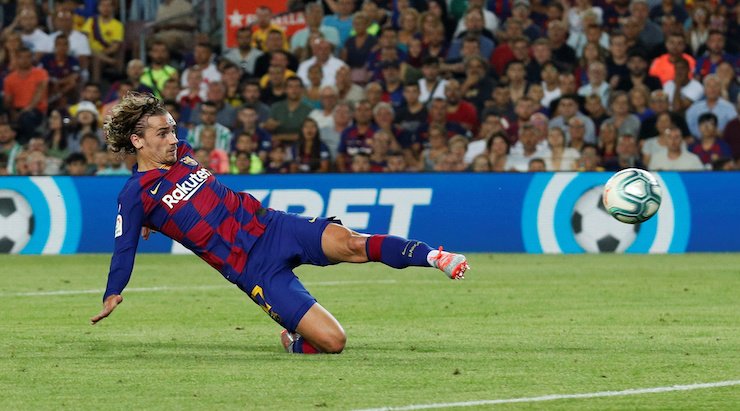 The name of Antoine Griezmann is on many lips since the start of the season 2019-20. His recent arrival in Barcelona after playing for Atletico Madrid for 5 years. The Frenchman scored a total of 212 goals in his career over 527 games, (188 with clubs, 24 with France national team). The World champions his expected to perform alongside Messi and Suarez this season. As he was thriving with Atletico, fans are expecting him to highly perform in Camp Nou, where he can unleash his full potential with Barcelona other superstars. Here is a selection of Antoine Griezmann‘s most iconic Instagram posts in 2019.

The Instagram Post at 8th place shows the more photogenic part of the Griezmann family. The attacker calls his wife Erika Choperena and their three-year-old daughter Mia his cheerleaders.

Antoine Griezmann is French and fulfills every cliché of his country of origin in the picture. After work, a glass of the finest wine from 1991. Sport clothes and fine wine, classy!

The sixth photo of Griezmann in 2019 is reaching 1.5 million likes. The opposing goalkeeper will have to stand up to this face when Antoine runs towards the goal alone.

For picture number 5, Griezmann wanted to honor the first goal he scored with FC Barcelona‘s Jersey. Here we can see him with all the teammates celebrating the joy of scoring.

Griezmann and Umtiti are friends as they know each other from the French national team. When moving to Barcelona, Griezmann was happy to play again with his dear friend and posted a picture of the series Stranger Things because of how alike the actors look to the football players. A Bengali newspaper even used photos of Dustin and Lucas from Stranger Things like pictures of footballers Samuel Umtiti and Antoine Griezmann being friends since childhood.

Like Papa, like Son. In April the newborn son Amaro Griezmann discovered the light of the world and already showed himself in the usual Griezmann winning pose. It is said that FC Barcelona has already deposited its interest.

With 2,1M likes, this picture represents one of the major achievements of Antoine Griezmann. Winning the 2018 world cup and scoring several goals in the competition was an incredible performance.

This post illustrates the celebration of a goal from the Frenchman, under the post, Griezmann quotes “What a pleasure to score in Camp Nou! Thanks for your support, may our colors shine”. The post cumulated 3,3M likes on Griezmann profile