All the results of The Best FIFA Football Awards 2019 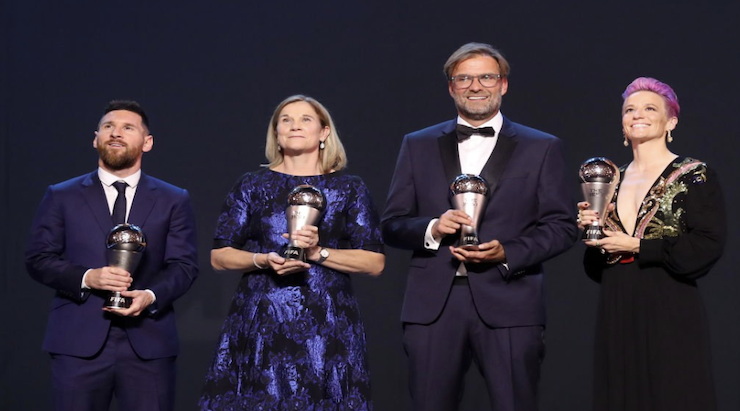 The Best FIFA Awards just were held on 23 September 2019 in Milan, Italy. During the FIFA Best of the Best Awards ceremony, Lionel Messi, Barcelona’s striker, received the award for the best player of the year.

The three competitors for the title were Leo Messi, Cristiano Ronaldo, and Virgil Van Dijk. They were in competition to be the successor of the 2018 winner, Luka Modric. During the ceremony held by FIFA, the name of the big winner was revealed and it is unsurprisingly Leo Messi.

10 candidates were in competition and three finalists were selected on September 2nd, 2019

It is the first time that La Pulga has the opportunity to lift the prestigious The Best trophy. Even if the Argentinian player is dominating international football for the past 10 years, the previous editions of the ceremony rewarded Luka Modric in 2018 and Cristiano Ronaldo in 2017 and 2016 as the Best player of the year. This fourth edition of the trophy. This fourth edition of the trophy rewards the Argentinian for his great season with FC Barcelona and winning the Spanish League. La Pulga was the top scorer of La Liga 2018-19 and won the European Golden Shoe against PSG striker’s Kylian Mbappé.

The Argentinian scored and a total of 36 goals during the last season championship. Despite a bitter end to the season and a defeat in the semi-finals of the Champions League and the King’s Cup final, Messi still reigns with an iron fist over the world of football.

Megan Rapinoe was awarded The Best FIFA Women’s Player trophy for 2019. The American forward ranked with 46 points and was rewarded for her brilliant season with USA national team by scoring 6 goals during the2019 World Cup, The American world champion and spokeswoman for women’s football wanted to raise awareness against racism and homophobia in football.

The Brazilian goalkeeper of Liverpool was awarded Best Goalkeeper of 2019 for his season his Liverpool. Last month, he was declared UEFA Champions League Goalkeeper of the Season and had won the Golden Glove awards for most clean sheets in both the Premier League and Copa America. He was competing against Barcelona‘s goalkeeper Marc-André Ter Stegen and City‘s N°1 and fellow Brazilian Ederson.

Alisson has been waiting for him on stage but is finally there and receives the prize from his compatriot Marta. “In life you have to fight and pursue your dreams” said the Reds’ goalkeeper.

Dutch goalkeeper Sari van Veenendaal of Atletico Madrid won the prize for best goalkeeper ahead of Christiane Endler of Paris Saint-Germain and Hedvig Lindahl. She was voted best goalkeeper during the 2019 World Cup in France.

Liverpool and Champions League winner Jurgen Klopp was selected to be 2019 best Men’s Coach, he was facing his fellow Premier League manager Pep Guardiola who managed to carry Manchester City on top of the English championship and Mauricio Pochettino whom he faced in the Champions League final.

2019 World Cup champion Jill Ellis was awarded The Best FIFA Women’s Coach 2019 for her ability to win the Women’s World Cup with the USA’s national team. She was competing against Sarina Wiegman from Netherlands national team and Phil Neville from England national team.

The Puskás Award rewards the best goal of the last season, it’s Daniel Zsori from Debrecen that was awarded the prestigious price. He wins against Leo Messi

The fictional dream team composed of the 11 best players of the season at their respective position. The players chosen were:

Javier Zanetti presented the Fair Play prize to Bielsa’s assistant at Leeds, for his gesture during the match against Aston Villa. Under their coach’s orders, Leeds let the Villans even the score after the Yorkshire players scored a goal while an opposing player was on the ground.

It is the mother of a Palmeiras fan, Silvia Grecco, who wins the award. Her son, blind, cannot see the matches but it is his mother who comments on the matches for her child. The legendary female Brazilian player Marta, in the assembly, cannot hold her tears.